Since its launch in 2017, Dual Hanko have been purchased by many Japanese customers as gifts for those living abroad, in addition to overseas tourists buying them as souvenirs.

All adults living in Japan generally have a hanko with their name engraved on it. When you live in Japan, you often have the opportunity to stamp your hanko to prove your identity or as confirmation when opening a bank account or submitting documents to government agencies. Hanko are also popular souvenirs bought by many overseas tourists visiting Japan.

Dual Hanko are different from other common hanko stamps because they are engraved with both Japanese characters and the alphabet. Unlike ordinary hanko with Japanese kanji characters or katakana, these seals have the alphabet, so even those unable to read Japanese can easily tell who they belong to.

A man from the U.K. ordered 13 Dual Hanko as gifts for his family and relatives when he returned home for Christmas in 2018. He highly regarded Dual Hanko as “a very unique and personalized Japanese gift”.

In this way, as the Dual Hanko became known both in Japan and abroad, we began to receive many requests through social media asking if they could order from overseas.

However, customers have to pay shipping costs when sending them abroad, which can be quite expensive. And to be honest, we were not sure if we could reliably deliver our products to overseas customers. We were also worried that people who are not used to using stamps may be unable to use them properly.

For these reasons, we have not sold Dual Hanko online to overseas customers.

Dual Hanko as a digital stamp

Recently, we received a request from someone living abroad asking us if we could sell our Dual Hanko as an image. We had no choice but to decline the request because this had never been considered before. However, as we thought about it, there are no shipping costs when delivering digital stamps (= image files) by email, unlike sending actual hanko stamps. It is our hope that digital stamps will increase the number of opportunities for overseas customers to conveniently use Dual Hanko.

When we attempted to make prototypes for the digital stamps, we discovered that clearer impressions of stamps could be achieved when made digitally. In addition, if they are made as PNG image files, the white areas of the image can be made transparent so it looks just like a real stamp. They can be used for documents, letters, emails, and more.

And, of course, there is no risk that the circular frame will be damaged by dropping or banging it like actual stamps, and a clear and crisp impression can always be obtained at any time. But, what digital stamps do not have is the physical experience of imprinting an actual stamp.

Digital stamps can be used in many ways 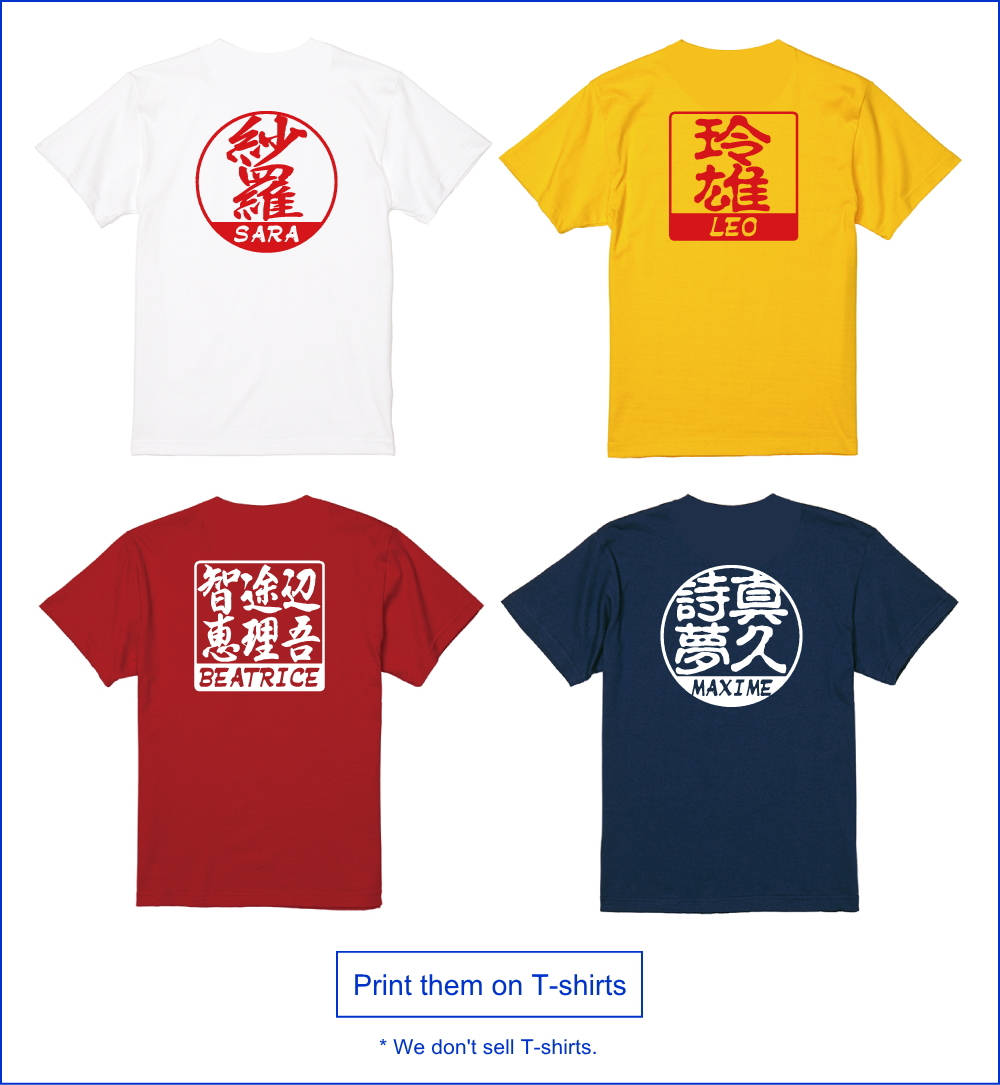 ■ They can be inserted as images into general document creation software.
The white part of the stamp can be made transparent to look just like actual stamps.
*Please refer to the instructions for each software to insert images and make them transparent.
■ If you convert them to PDF files, you can also use the stamp function to insert them into PDF documents.
■ Sent as approx. 14 cm image file. You can freely change the size of the image yourself.
(Actual Dual Hanko are 16.5 mm to 18 mm in diameter)
■ You can paste them directly into emails in HTML format.
■ They can also be used as profile pictures on social media.
■ Use them to digitally express yourself in a wide range of other ways.

Digital stamps are available with katakana and the alphabet. We have also added the "Gyosho" (semi-cursive) typeface, and you can choose from two colors: vermilion and crimson.
■ Character type (kanji characters / katakana)
■ Shape (round / square)
■ Typeface (Kointai / Gyosho)
■ Color (vermilion / crimson)
You can choose your favorite design from a total of 16 variations.

■ Kanji characters were created in ancient China, and were introduced to Japan in the second half of the 4th century.
■ They have both a “reading” and a “meaning”. We will select and combine Chinese characters that have a similar "sound" to your name, but that also have a good meaning.
■ Names can be made into kanji following their pronunciation.
■ The number of kanji depends on the number of syllables in names and the readings of the kanji.

■ Katakana is said to have been created in Japan about the 9th century, and are partially simplified kanji characters.
■ They only have a “reading” and no meaning. Today, it is mostly used to write foreign names, places and words.
■ Names can be made into katakana following their pronunciation.
■ The number of katakana depends on the number of syllables in names.

■ This old typeface created in Japan is round and easy to read, and it is still used for many stamps to this day.

■ This typeface is characterized by its dynamism, with characters written continuously as in calligraphy or cursive.

Leave the Japanese character choices to us

Our shop has created more than 1500 Dual Hanko. In the process, we have noticed that overseas customers have certain tendencies when choosing kanji characters.

When a woman from the U.S. was suggested that the "ma” in her name could be made using the character for "horse", she immediately rejected the idea, saying “I am a person, not a horse”.

There are also other similar examples. People would say “I'm not a fruit” when suggested “pear” for “li”, or “I'm not a vegetable” when shown “greens” for “na”.

These three characters are often used in Japanese names recently, but from these experiences, we have learned that those living overseas tend not to choose kanji with meanings not related to people.

On the other hand, we also learned that kanji characters popular among overseas customers include “logic”, “truth”, “beauty” and “peaceful”, all of which have positive meanings.

This is why we always try to choose kanji with good meanings, not just pronunciations, and to connect the meanings in a comprehensive way (of course, this does not necessarily mean that the meanings will make sense together).

So, we would like you to leave the selection of kanji to us for custom-made digital stamp. We will choose and combine kanji characters that please our customers.

We will attach a description of the characters

If you are interested in our Dual Hanko, please click the link below to go to the product list page. We look forward to receiving your orders.

Thank you very much for reading!